How do I manage interference violations?

The most common type of interference is by base runners that impede or hinder a fielder’s attempt at making a play.

How do I enforce interference?

Where do I place the batter-runner?

What's the call after a batted ball gets by the fielder?

To enforce interference, immediately call time and declare the runner out.  Direct other runners back to the bases they last touched. 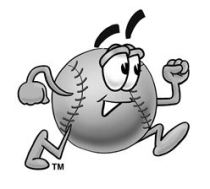 - When a runner (offense) interferes with a fielder’s (defense) attempt to make a play, the runner is immediately called out.  Call time at the moment you spot the interference, creating a dead ball situation that stops all further play.

- Most often, you’ll return all other runners to the last base they touched prior to the interference.  No run is allowed to score after an interference play.

- Some interference violations are not so obvious and require umpire judgement.

Example: a runner passes in front of a fielder who fumbles a ground ball.  If you believe the runner didn’t cause the error, let the play stand.  If the runner made a deliberate attempt to avoid contact with the ball or fielder, than you have an even stronger case for not calling interference.

- Shout your call loudly so everyone understands the ruling.  With multiple runners, point at each and instruct them where to go.

-  Only the interfering runner in the field of play

- Usually all runners return to the last base touched prior to the interference.  An exception is when the batter hits the ball into play.  A good rule of thumb: “A batter-runner (BR) is not penalized for interference by other base runners”.  A BR acquires the base that the umpire believes he would have reached if not for the interference.

- Award 1st base to the batter-runner (BR) if he hit the ball into play but did not reach first base at the time of the interference.  Any other runners are forced to advance to the next base if needed.

Example:  a runner at first (R1) was between 1st and 2nd at the time of interference by another runner.  R1 is placed on 2nd base in order to award 1st base to BR.

There is no interference on the runner if, after the first attempt by a fielder, no other fielder has an opportunity to make a play

- If a batted ball goes through or by a fielder (including the pitcher), a runner is not at risk for interference unless another defender has a chance to make a play on the ball.

Example: a shortstop, playing up in the base path, allows a ground ball to slip through his glove which then hits a runner, running in the base path behind him.  The runner is not called out for interference and play continues.

- Only one fielder is deemed by the umpire to have a play on the ball at any moment.  If a second fielder had a reasonable chance to make a play after the error in the example above, you would call the runner out on interference.

Next up:  How do I rule on collisions?