How do I Rule on Collisions?

Collisions (aka “train wrecks”) between a runner and fielder are among the most difficult plays to rule on because player accountability can change in a split second.  Sometimes a collision results in “nuthin” (no call).

What are the most common types of collisions that result in nuthin’?

How do I make my call and manage a collision play?

Dispelling a common myth – does a runner have to slide to avoid contact?

Timing is critical in determining whether a collision results in obstruction, interference or “nuthin”

- Nuthin’ means that no-call is made and play continues.  A typical example is a runner who collides with a fielder that is reaching to catch a ball.  These are tricky calls because accountability between the fielder and runner changes in a split second

- When you anticipate a close play between a runner and fielder, follow this sequence once the ball is thrown:

When legally positioned players, through no fault of their own, are drawn into a collision, you’ve got nuthin’ 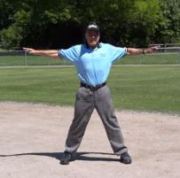 - Even though you might have a nasty collision, don’t call time until the entire play ends.  Only stop play (“Time!”) if you feel that an injured player is at further risk of harm during the remainder of the play.

- The nuthin’ ruling assumes that the runner was in his expected base path at the time of the collision and contact was unintentional.  Otherwise, you have runner interference.  It also assumes that no obstruction on the runner (e.g. hesitated, slowed down, ran to the side) was caused by the fielder prior to the collision.

A runner must either slide or attempt to get around a fielder who has the ball AND is waiting to make the tag
- In the above scenario, call the runner out for interference if he doesn’t slide or attempt to get around the fielder, whether the runner made contact or not.  The intent of this rule is safety (to prevent collisions) and to prevent a runner from trying to knock the ball loose from the fielder.

- The runner does not by rule have to slide to avoid contact (a common myth).  He has four options:  1) slide; 2) get around the fielder like move to the side or even jump over; 3) retreat; 4) “surrender”.

- The runner need only attempt to avoid contact.  A young player, who executes a poor slide and ends up stumbling into the fielder, would not be called out for interference.

- But what if the fielder (who just caught the ball) was turned away from the oncoming runner at the time of the collision? Then the call is nuthin’, because the fielder was not deemed as being ready to make the tag!

- The nuthin’ call assumes that the runner’s contact was unintentional; otherwise, the runner is always out (and ejected for unsportsmanlike conduct).

- For close plays, especially at home plate, a catcher with the ball and ready to make the tag may “block the plate” with any part of his body.

Next up:  How can I anticipate violations and deal with uncertainty?